"I cannot and will not cut my conscience to fit this year’s fashions.” – Lillian Hellman

I was posting somewhere about novels I’ve recently admired and enjoyed and thought I should list them here:  The Enchanted, Rene Denfield; Alligator, Lisa Moore; Lullabies for Little Criminals, Heather O’Neill; The Flying Troutmans, Miriam Toews.  Reliable for literary pleasures.

I’ve been reading Ethan Canin and David Leavitt this week in short form, geniuses both, along with Tessa Hadley’s new New Yorker story which I quite liked. 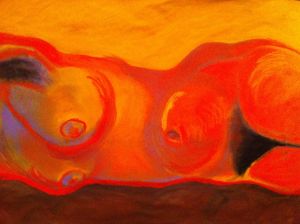 a painting of mine from 2012 gratuitously added here for colour

I finished the (first draft) of an essay for a collection on women traveling alone, wrote a piece after Robin Williams’ suicide about my father’s suicide in 1973 (a piece I have wanted to write for 40 years), then this Monday wrote a short fiction called “Castaways” about two women struggling to keep their love whole on an island off the east coast of Africa, and another called “The Bleaching Houses” about a young girl growing up in a town in Connecticut during the ivory trade of the early 1900s.  At first I included a passage from Ulysses which fired my character’s imagination, only to remember somewhere along the way that Ulysses hadn’t been serialized yet in the Little Review, which meant that I had to either find an alternate passage that would work as well, or move the entire story to the 20s (not as booming a time for the ivory industry).  I did the latter, but that meant deleting the World’s Fair in St Louis in 1914.  I don’t know how historical writers like Emma Donoghue and Sarah Waters do this (well, of course they do it by researching ahead of time).

I love when I have no notion that I am about to write something, and then, hours/days later, there it is, a draft, a decent draft, a presence where there was not even, two days before, an absence.  My work is almost always gratifying to me these days, and in that, I am fortunate.

I also saw the cover of my new fall poetry book “Love Will Burst into a Thousand Shapes” as it went off to the printer, and got to see how all the blurbs had come together–the design of the thing.  Now I itch to hold it in my hands, but I will have to wait until October sometime.  Caitlin Press rocks my world.